This is a short (well that was the original intention, but as you’ll see it’s anything but) blog post to mark the day I changed my name from my married name of Watson back to my maiden name of Allan. No big deal you might think – or not! Actually it has been a huge journey to get to this moment. I was married for 17 years (19-36 years old) and have been divorced officially for 16 years, though we parted over 20 years ago.

Why has it taken so long?

It seems to be a question of Identity – how am I identified, who do I want to be identified with? Who am I still connected to, and who am I not? A large part of the reason I have taken so long to make the change is because I have two daughters whose name is Watson, and who understandably wanted to continue with our shared family name. That for me was a good enough reason to shelf the matter, to wait for another moment, a better time, a more compelling reason.

So the right time has presented itself – enough healing, enough disconnecting, enough conversations with loved ones – a readiness for change. But I have been Debbie Watson for 37 years and it’s been hard to suddenly find myself with the freedom to choose. I could revert to my maiden name without much fuss, but equally I could choose a different name?

I grew up with a tradition and in a patriarchal culture that instructed we take our father’s name, our husband’s name, somehow the imperative was to continue the all important male line/name. I remember my own father, feeling superior towards his step siblings as he was able to ‘produce’ both a son and a daughter. As I think and write this memory of my dad, I realise though that he didn’t favour having a male child over a female one. Our childhood was a difficult one, violent, unsafe, and wholly frightening and confusing. So the question of whether to willingly go back to my birth name, knowing the memories associated with those early times, was one that I had to spend time answering for myself.

I realise it is a spiralling dialogue, the shadow of the past informing the present, the ever evolving present reevaluating the past. And the future, unknown but step by step being entered. Like the waves of the sea roaring, powering or more gently coming in, all the while the undercurrent pulling it backwards – the forward motion leading as the tide comes in, the backwards motion leading as the tide goes out. I’ve been lucky enough to feel that at a body level, our own tidal flow, the fluid movement back and fore, towards our feet, towards our head. It’s one of the most vivid moments in my body-mind centering experience. And during that exploration there was a further invitation made to co-create that flow, to enter into the space with the person whose flow you were listening to through your hands, to surrender to a co-creative experience in which that flow became conscious and there was a possibility of a meeting, a choice making, a discovery as we ‘met’ each other in that space.

This co-creative force underpins our own existence, sperm and egg together, opposite energies of speed and stillness, piercing motivation being allowed to enter the space of patience and possibility. A new unique life being energised, the spark of life that may lead to the birth of a child with the potential to experience the whole spectrum of possibility that is created when these two polar-opposite forces ‘decide’ to merge.

So the decision I’ve come to is to honour the name I was given at birth. As an illegitimately born child myself, and as the grand daughter of an illegitimate only girl child who was taken from her mother, never allowed a father’s name or any knowledge of him, I am grateful that I knew, and got to love, my mother and father. And that my daughters got to know and share love with their grandparents.

But this post isn’t over yet, there is a modern day and future twist to the tale. Part of my journey over the last few years has been to begin to uncover and discover my matrilineal history. My mother suffered mental illness and depression for most of her life, probably brought on by a harsh childhood, and an even harsher early adulthood when she became pregnant by a man, his identity still not revealed to this day, and was not allowed to be a mother to the daughter she gave birth to. She was treated for mental illness for most of her life, including ECT treatment in the late 60s and she would always say that it took away her memories and that was why she didn’t speak about the past.

Growing up with a fragile, depresssed, isolated and often suicidal mother meant that I took on the role of her emotional carer, trying from an early age to make her feel better, and avoiding anything that would upset her. It was not until her last birthday, on 25 June 2013, before her death in March 2014, when I took her out to visit Castle Fraser in Aberdeenshire that she began to open up.  On that car journey she told me things about her past, about her mother’s past and even about her grandmother’s story. I drove on taking in all this new information and writing it out as soon as I stopped the car. It was incredible to me, exciting, thrilling and suddenly I felt as if I had access to more of my own story, through these tiny fragments of my maternal history. 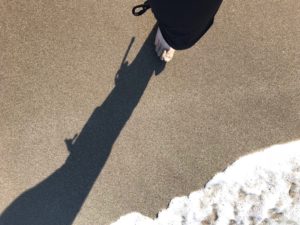 The stories I have pieced together tell of a tragic line between my mother, grandmother and great grandmother – all named Bessie. It seems as if there was something ill fated about their lives, and specifically the first (and in my great grandmother’s case, only) borne child. The trauma, shame, stigma, and fear that was experienced by each of these women before the age of twenty was enormous and created a lifelong impact which reached out beyond themselves to affect those of us who came after. I am continuing to try to understand my ancestors’ lives, to fill in the details, some of which involve royal castles and a lot of servile powerlessness. My hope and plan is to develop a creative work which is both performative and participatory so that others who want to look at their maternal stories of trauma and shame, have a safe place to explore it. And perhaps even to embody and express those stories in a creative and ultimately healing way.

I didn’t intend to share the story of the 3 Bessies in this post but in the writing I must have tapped into the undercurrent flow and it felt good to follow it. It’s taken me to a point of understanding the role of past, present and future in making this decision. I am going back to my birth name, honouring the forename my mother gave me, the middle name they both agreed on, and to my father’s surname. But I am also going forward, adding a second middle name of Isabella. Isabella was my great great grandmother, who lived on Gamrie Bay in the North East. She gave birth to the first Bessie who left there to be a servant girl at Balmoral Castle, the holiday residence of the Royal Family since Victorian times. I think that is the moment where the story of deep trauma began and where it seemed to be passed on, almost through the naming of the next two generations of Bessies.

Biologically, each trio of grandmother, mother and baby share an incredible secret.  As a female baby is about to be born, all of the eggs that she will ever have available to fertilise are ‘downloaded’ into her ovaries before birth. This means that the egg that became me was contained within my grandmothers womb, as she carried my mother there. I know it’s mindblowing but it begins to set the scene for understanding how and why maternal experience is passed on emotionally, genetically, and energetically. Even this week the news highlighted the lack of support for women whose births are traumatic and who end up with mental ill health because of their experiences. Hopefully, and reflecting my own journey of healing, the zeitgeist will support us in trying to explore, to understand and to express all of our stories.

I dedicate this post to my mother Bessie Allan and to my daughters Cara Watson and Sasha Watson. (03 December 2018) 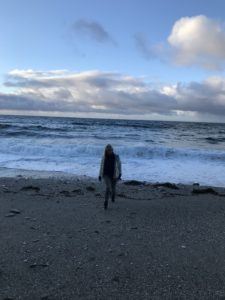 One thought on “A question of Identity?”

This site uses Akismet to reduce spam. Learn how your comment data is processed.